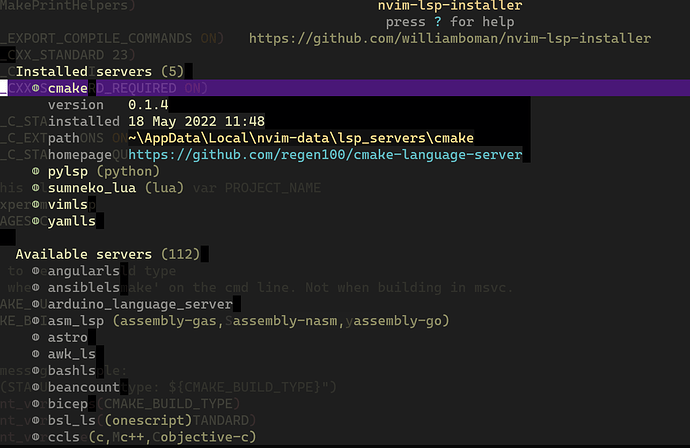 has anyone run into this?

I don’t have a solution for this, sorry, but yes, I experienced this problem.
For example, the graphql server was installed, but I was constantly getting an error from the lsp saying that the binary was not available. At the end, I had to manually install it and then it worked.
It is a bit of an annoyance having to guess which servers will work and which servers will have to be installed manually, which makes me wonder if it is better to just install them all manually, unless the lsp-installer is also doing some extra configuration to make life easier

Did you run an lspconfig setup function on them?

My lsp config is very simple:

It might be then related to lunarvim. Better to ask there

Nvim lsp installer don’t write the binary’s path into your PATH (and any application other than system package manager should not do that for sure), and the LSPinfo shows that it directly calls the binary which is not in your PATH. Your should change the command to directly run the executable in the correct path

I always install it manually. I don’t want a application to install the package for me (unless it is bundled like luaJIT is bundled in neovim), I want to handle the dependency with my package manager, not an application.

I’m theory it adds it to the runtime path within neovim, so commands running from there should find it without affecting the external runtime path.

I don’t use nvim-LSP-installer, so I’m not sure if it does. But doesn’t the runtime path is only lua runtime path, and not PATH to execute binaries?